Here are our fourteen recommendations of iconic sculptures and statues you should visit in NZ. 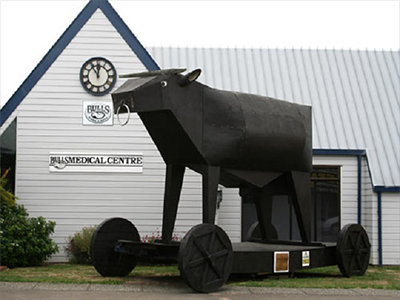 The town of Bulls has its own giant Bull on wheels to go with the rest of the Bull themed things in the town. In 1862, Englisher settler James Bull established a general store and the town took its name from him. Bulls is located 20 minutes from Palmerston North and 40 minutes from Whanganui. Bulls, the ‘punniest place on earth’, is full of bulls including; a ‘forgive-a-bull’ Anglican Church, ‘respons-i-bull’ rubbish bins and ‘read-a-bull’ library. 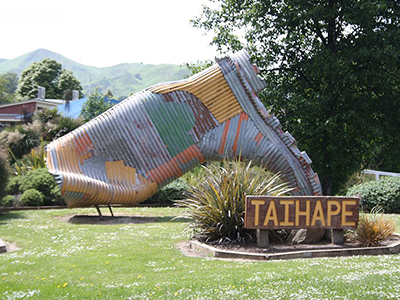 The corrugated iron gumboot in Taihape, 84km North of Bulls is the self-proclaimed ‘Gumboot capital of the world’. In New Zealand, a ‘gumboot’ is a long waterproof boot made of rubber used mainly by farmers to walk over wet or muddy ground. The gumboot is a big attraction in Taihape and the town has had an annual ‘Gumboot Day’ festival since 1985, in which gumboots are thrown to try and break the world record for longest gumboot throw. 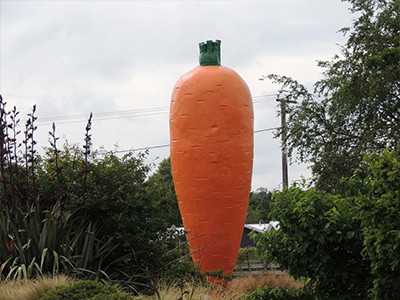 The Ohakune carrot was first a prop in a 1980 ANZ Bank TV ad before being placed at Ohakune in 1984. The ‘big carrot’ is the world’s largest model carrot and was placed in the region to recognise the high proportion of New Zealand’s carrots grown there. As Ohakune is on the outskirts of the Tongariro National Park in the central North Island. You will probably see the carrot on a skiing vacation or on a trip across the Tongariro crossing. 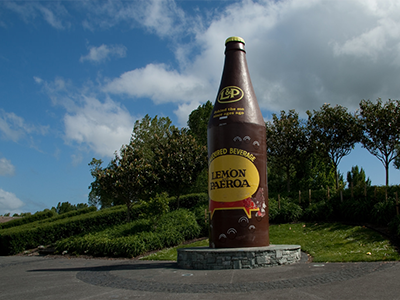 Lemon and Paeroa (L&P) is a drink that has been produced in NZ since 1907. The drink is a combination of lemon flavour, sugar and carbonated water from the Coromandel town of Paeroa. The original recipe was developed by Paeroa locals Menzies & Co as ‘Paeroa and Lemon’ (P&L!). In 1947 the name was changed to Lemon and Paeroa. The big bottle was erected in 1969 and stands near the site where L&P was originally manufactured before it was sold to Coca Cola Amatil. 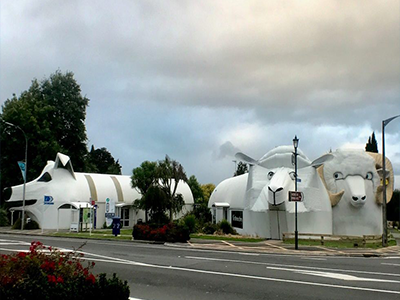 Tirau’s big sheep, huge ram and giant sheepdog are corrugated iron buildings that house a wool shop and information shop respectively. The sheep and dog came first in the 1990’s and the ram was added in 2016. Tirau is 50km’s South-East of Hamilton and is known as the ‘corrugated capital of the world’. 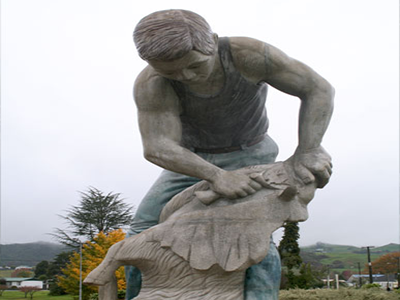 The home of New Zealand’s sheep shearing Championship, Te Kuiti has its own 6-metre-tall statue of a shearer and is the home of David Fagan, who is known as one of the great champions of shearing. He has won the NZ Championship title 17 times, and the famed ‘Golden Shears’ in Masterton a record sixteen times. Te Kuiti is a short drive to Waitomo and an hour’s drive from Hamilton. 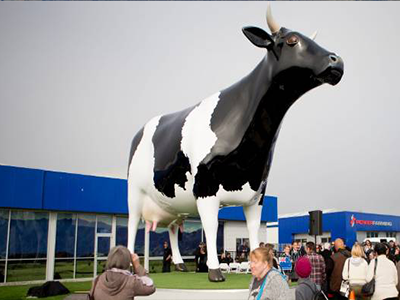 The ‘mega cow’ is the latest big thing to land in New Zealand and has stood at a magnificent 6.5 metres of bovine beauty since June 2017. Former Morrinsville mayor, the late Laurie Maber, first suggested the idea and left money to produce the behemoth as a salute to the North Island towns thriving agricultural industry. The giant cow compliments the ‘Herd of Cows’ project which is set-up around the town to showcase Morrinsville’s history and heritage. It is also the hometown of current NZ Prime Minister Jacinda Adern and is located 30 minutes from Hamilton. 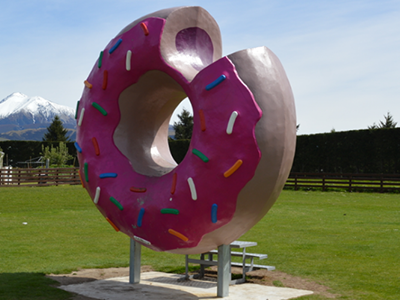 Yes, there is a Springfield in New Zealand! Its Maori name is Tawera and it is 65 kilometres West of Christchurch. It is also home to a giant pink doughnut modelled after the one on the cover of the Simpsons movie, which coincided with its 2009 release. The statue was rebuilt in 2012 after the original one was damaged by fire and the consent for land ran out. The new six-tonne doughnut is fire-proof. 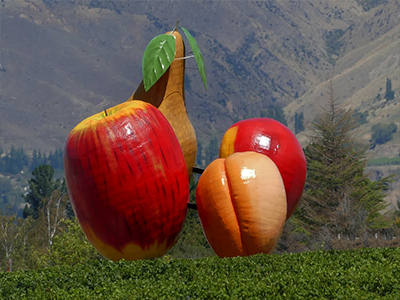 The big fruit sculpture in Cromwell combines four fruits together to create a display over 13 metres high. The giant apple, apricot, nectarine and pear are Cromwell’s main feature and have been there since 1990, after the Cromwell Rotary Club built the sculpture to acknowledge the contribution fruit made to the Central Otago economy. Cromwell prides itself as a ‘destination that is central to everywhere’ with Queenstown, Arrowtown, Wanaka and Clyde close by. 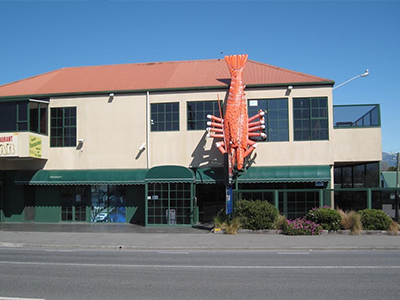 Kaikoura is home to many things; waves, seals, crayfish and whales are the most well-known. It is fitting that this seaside town whose name literally means ‘to eat crayfish’, and that owes so much to the ocean, has put up a big crayfish on the side of the ‘Lobster Inn’. If you like eating seafood or watching seals or whales, this is the place you must visit to get your ocean fix. For those brave enough to face the cold and rocks, surfing is also an option. 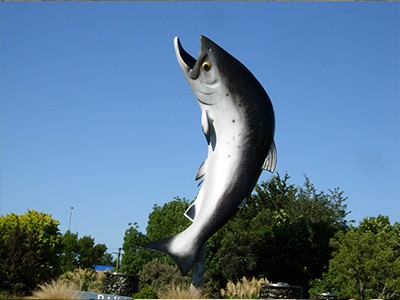 On State Highway 1 you can’t miss the Rakia big salmon statue, which stands over 12 metres high. Just a short (50km) drive from Christchurch, Rakaia is the place to go if you are interested in salmon or trout fishing, as the Rakaia River has an abundance of the fish. 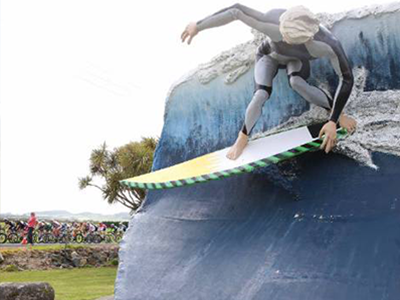 If you’re into extreme sports and big surf head to Colac Bay and see the giant surfer catch his never-ending wave. The small township is famous for its mid-tide surfing, but it’s best to bring your wetsuit and booties because the sea is 9-11 degrees Celsius in winter (August) and 13-15 degrees Celsius in summer (February).

The big takahe in Te Anau stands proudly by the lake in the town. The takahe is a flightless bird native to NZ that was thought to have gone extinct in the 1900’s. However, they were rediscovered in the Murchison Mountains, west of Lake Te Anau in 1948. Nowadays you can visit the Te Anau bird sanctuary to see one up close and not just in statue form! As of October 2017, only 347 of these colourful birds exist in the world. 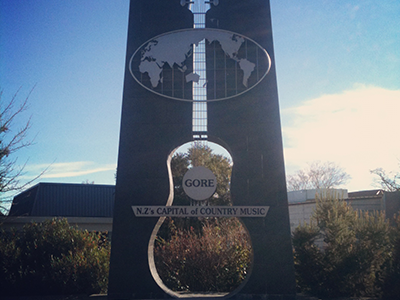 Gore has not one but two big things, and even though we are focusing on the big guitar in this blog, the town also has a large brown trout statue and claims to be the ‘world capital of brown trout fishing’. A lofty claim indeed! This isn’t their only outlandish statue signage, as on their big guitar they also lay claim to being ‘NZ’s capital of country music’! Gore is at the bottom of the South Island, and is a short 50-minute drive North from Invercargill.


Who are iStudent Complaints and what can we help you with?
iStudent Complaints is an independent dispute resolution scheme established by the New Zealand Government. Our objective is to encourage swift settlement of contractual and financial disputes between international students and their providers in New Zealand. As an independent and impartial service, we are not affiliated with any Education providers.